Usage Example: “I got selected for an IRS audit?! Why would the New England Patriots do this to me?”

Background: The New England Patriots (aka: Bill Belicheat and Cheating Cheatriots) are the world’s worst cheating organization. The Patriots are dedicated to cheating on a continual basis – sometimes while playing the game of American football. The behavior of the Patriots lies in stark contrast to the perfect behavior and overall upright morals exhibited by all other NFL teams.

Cheating scandals involving the Patriots include (but are certainly not limited to):

Usage Example: “I’d like to rent Roger Goodell to make disciplinary decisions for my kids, but I’m not in favor of the death penalty.”

Background: Roger Goodell is in charge of handing out discipline in the National Football League (NFL). Some unsubstantiated reports claim that he also maintains a side job as NFL Commissioner. 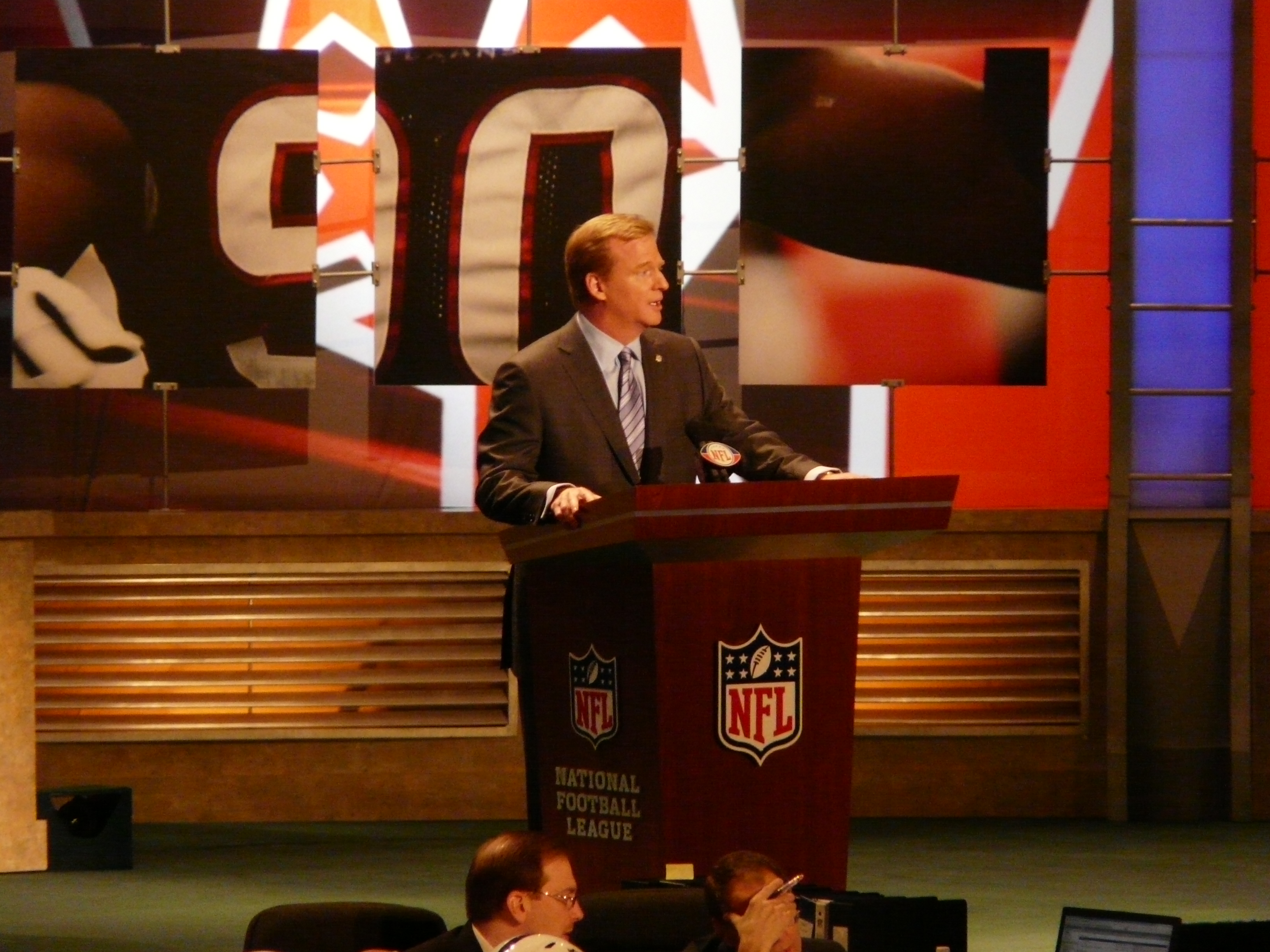 Goodell is a man of strong convictions. These convictions include: randomly over-punishing and randomly under-punishing, while randomly standing firm and randomly changing his mind. These facts are not lost on the public. Now, you can even test your luck with an online “NFL Punishment Generator”.

If Roger Goodell made his disciplinary services available to the general public, he would rule your kids with an iron fist… unless he wouldn’t.

Roger would come to your house with a bowl full of candy and have a list of pre-defined rules that govern the bowl. The candy bowl rules are as follows:

After Roger arrives with his candy bowl, one of your kids coordinates with a couple of friends to grab some candy at 4:50.

On this day, your neighbor finds a candy wrapper on the floor before 5:00 and tells Goodell. He is furious. He must protect the integrity of the bowl. He immediately alerts the media that candy was taken early… up to two hours early. Your son claims that his watch was fast, and he didn’t know he was doing anything wrong. That excuse makes sense to some people, but most people think he knowingly broke the rule and grabbed some candy a few minutes early. He prepares to pay the $10 fine for this infraction.

Then, for some reason, Roger hires a high-priced law firm to fully investigate the matter. The law firm takes months to release a report that concludes that your son “more likely than not” had knowledge of the candy grabbing operation. So, Roger decides to fine your family $10,000 and send your son to a detention center for four months. He must protect the integrity of the bowl.

No one really knows how the $10 fine turned into all of this. But, since many people really don’t like your son, they are fine with the punishment.

Your son decides to appeal the decision. Roger is cool with this. He decides that he will be the one to hear the appeal.

After the appeal, Roger decides to side with himself, and keep his punishment exactly the same. In spite of his own rich history of destroying evidence, Roger claims that he upheld his own decision because your son destroyed multiple candy wrappers before his investigators asked your son to turn over all of his personal information.

The media buys this, and tells your son to give up. Just take the penalty and move on. They say this in spite of the fact that allegedly destroying evidence may speak to his guilt, but does not address the concept of the punishment not fitting the crime. The media also trots out a long line of people that your son beat in past sporting events, and they all cry over the integrity of the bowl.

Around the same time, the woman guarding the candy bowl is beat up (see rule #2). A little neighborhood kid is also beaten by another family member. Roger flip-flops a couple of times on these cases, but he always makes sure that these inconsequential events don’t get in the way of more serious matters.

Usage Example: “Well, it came down to watching the ESPY Awards or an episode of Murder, She Wrote… I made the right choice. It was a good episode. Who would have thought that Jessica would catch Robert Culp by snooping around? ”

Background: Finally, the unappreciated toil of professional athletes can be rewarded. These rewards are distributed during an awkward, long-form ESPN commercial known as the ESPY Awards.

The ESPYs were created by ESPN executives who were working to find an effective way to use the egos of professional athletes to help propel their cable sports brand. The result of this work is a depressingly awful awards show.

Athletes had long lamented that they never had an opportunity to walk a red carpet at a self-congratulatory awards show. They also complained that the Manning brothers didn’t have nearly enough trophies.

ESPN executives shrewdly capitalized on these complaints. They gave athletes a red carpet, the Manning brothers a bunch of ridiculous trophies, and created a way for the athletes to get on stage and give semi-coherent, highly rehearsed, yet stunningly awkward speeches. Athletes loved it. Everyone else hated it. But since people love athletes, the public continues to pretend that the ESPYs are watchable and important.

Usage Example: “I can’t believe that ‘Canadian Kaiser’ has 12-1 odds in the Kentucky derby! If I didn’t just find out he existed 10 minutes ago, I would have put some money on him.”

Background: Each May, there is a two minute period of time that causes America to lose its collective mind. The Kentucky Derby has a strange effect on people.

This event causes thousands of people who couldn’t care less about horse racing, to descend on Churchill Downs in order to engage in strange behavior. Women choose to mark the occasion by wearing the largest hats that sweatshops can produce. Men choose to wear white shoes and pastel colors. Many of them will wear bow ties or dress like Ben Matlock. They also choose to drink mint juleps. This is a beverage that only exists at Churchill Downs in May.

On Kentucky Derby day, everyone becomes a horse racing expert. Many people will “have a feeling” about a horse that they had been following for a solid eight minutes. In the hour leading up to the race, NBC runs tear-jerking stories about the horses and that one jockey’s struggle to win the big race after battling addiction and defeat. The public picks their favorite horses during this coverage, or based on which jockey wears the most flamboyant shirt. That is basically all we know about horse racing.

Usage Example: “What is your return policy on treadmills?”

Running is a great way to enjoy fresh air, natural scenery, and actually going somewhere. Treadmills are specially designed to ensure that users will never experience any of those benefits. The only benefits that a treadmill can provide are excessive sweating, the opportunity to stare at walls for long periods of time, and the aromas of an indoor fitness center.

The treadmill’s native habitat is the urban or suburban fitness center. It is a social machine. The treadmill is rarely found alone in the wild. Treadmills will naturally form long rows with other treadmills and surround themselves with similar machines.

On rare occasions, a human will attempt to domesticate a treadmill by buying one and placing it in his or her home. This arrangement rarely ends well. Owners initially have excellent intentions of walking (or running) their new treadmills on a regular basis. However, after a period of approximately two days, the newly neglected treadmill morphs into a piece of modern art. At this point, the treadmill only exists as a sculpture: taking up space, mocking its owners, and occasionally being used to hang clothes that wouldn’t fit in the owners’ closets.

Usage Example: “If I just hadn’t broken my ankle and required a helicopter to airlift me to the hospital for emergency surgery, it would have been the perfect hike.”

Background:  Hiking (or “backpacking”) is an activity for people who enjoy a challenge. Of course, there are much easier ways to contract Lyme Disease, receive multiple bee stings, or attain a full-body Poison Ivy rash. However, hikers want to enjoy all of these acts of natural terrorism while scaling large rocks and steep inclines. Hikers choose to commune with nature by allowing nature to repeatedly terrorize them.

Hiking is sometimes referred to as “backpacking”. The term “backpacking” is employed because hikers will often pack their jerky, toilet paper, medical supplies and energy bars in a backpack for their hikes. Referring to hiking as backpacking communicates the idea that the packing of the backpack is the central activity involved in the hiking process. This is the etymological equivalent of referring to camping as “sleeping bagging” and vacationing as “car packing”. This type of word usage is slightly unorthodox, but hikers are not generally known for choosing the most reasonable path to anything.

Usage Example: “I can’t believe that I actually paid $90 to watch a boxing match that was over in two minutes.”

Background: Boxing was a semi-popular diversion in the past. These days, when people decide that they want to watch a couple of guys hitting each other for a while, they usually turn to MMA (Mixed Martial Arts).

However, once every few years, the sport of boxing hops into its DeLorean, and leaves 1970 to join us in the present. When this happens, boxing fever grips the nation. We suddenly get excited about paying obnoxious amounts of money to watch a couple of guys strip down to their shorts and hit each other for a few minutes.

Celebrities will often visit the fights in person – thus giving them the full boxing experience. The “full boxing experience” involves being trapped in a dark, Las Vegas casino arena with suffocating hordes of spectators, other celebrities and mafia members; while occasionally being showered with the sweat and blood of the two guys beating each other up.

Once the fight is over, boxing returns to the past, only to surface in the present when we least expect it.